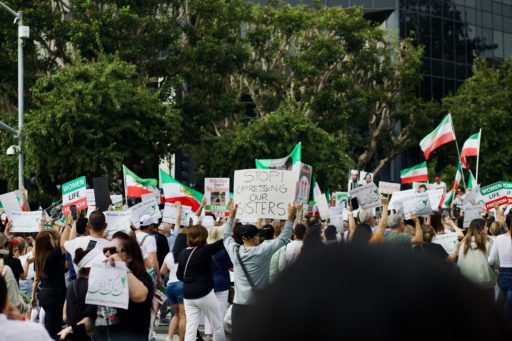 The distressing events transpiring in the Islamic Republic of Iran impress upon us the need to issue a clear and declarative statement against the institution of religious or morality police in particular, and the ideology of compulsion in general. We do so not from a political or partisan perspective but from a deeply held sense of moral and religious obligation flowing from our Islamic faith and sincere commitment to God.

The Quran instructs us in no uncertain terms, “O you who believe, stand up firmly for justice, as witnesses before God, even if it be against your own selves” (Q 4:135). In words attributed to the Prophet Muḥammad in Saḥiḥ Bukhārī, he is reported to have said, “Help your brother, whether he is an oppressor or he is oppressed.” The people asked him, “O God’s Apostle! It is right to help if he is oppressed but how should we help him if he is an oppressor?” The Prophet replied, “By preventing him from oppressing others.” There is a special urgency and duty to speak out against actions committed in the name of Islam, lest its image be sullied in the eyes of the people around the world.

We hereby call for the complete and total abolition of religious or morality police, wheresoever they may be found. The institution of religious or morality police violates a core tenet of the Quranic message: “Let there be no compulsion in religion; truth stands out clearly from error” (Q 2:256). This verse can be understood as a universal declaration of religious freedom, which prohibits any coercion of conscience in matters of faith. The Quranic theology does not allow for coercion in religion as this would entail questioning the divine plan:

O humankind! Verily, We have created you from a male and female, and We made you peoples and tribes that you may come to know one another. Surely the most noble of you before God are the most righteous of you.

God did not intend for all human beings to follow one religion, law, or way:

For each [religious community] among you We have appointed a law and a way. And had God willed, He would have made you one [religious] community but [He willed otherwise] that He might try you in that which He has given you. So race with one another in good deeds…

Even more explicitly, the Quran proclaims:

And had your Lord willed, all those who are on earth would have believed all together. Would you then compel men till they become believers?

Being a book of justice, the Quran endorses religious freedom not just for believers but also for non-believers:

Unto you your religion and unto me my religion.

If this is the case for non-believers — that they cannot be forced or coerced in matters of religion — then how much more so does this apply to fellow Muslims and to one’s own people?

The Quran argues that judgment is left up to God, who will Himself reward the righteous and punish the wicked; that job is not left to fallible human beings. Because faith is a matter of the heart, it cannot be coerced; true conviction rests in the heart and the mind. The Prophet himself is forbidden to use coercion in matters of faith:

So remind [them]! You are but a reminder; you are not a warder over them!

Nowhere does the Quran endorse the use of coercion in matters of religion. Neither can virtue be instilled by force. Rather, belief and virtue only come from God, and they grow naturally out of a religious and virtuous society, which itself can only be established within an environment of religious freedom. The role of temporal leaders is to maintain the claims of justice in society, and the role of religious leaders is to instruct with beautiful preaching and admonition.

The task of creating a virtuous society is to be led not by religious police by the means of their batons but by the joint efforts of the entire community of faithful using the power of their tongues — and the examples they set in their own conduct and dealings:

Let there arise among you a community inviting to the good, enjoining right, and forbidding wrong. It is they who shall prosper.

The original understanding of “enjoining the right and forbidding wrong” — during the lifetime of the Prophet Muḥammad and as found in the earliest exegetical commentaries — did not involve any use of force or violence; rather, the invitation was to be done with beautiful preaching and admonition, as the Quran commands:

Invite to God’s way with wisdom and beautiful preaching. And engage in discourse with them in the most gracious manner.

There was no religious police during the lifetime of the Prophet Muḥammad. The traditional sources simply claim that he assigned market inspectors to prevent fraud from occurring in financial transactions. However, there was no concept of forcing people to pray, fast, or wear certain clothing — such as the headscarf or veil — or of using physical violence or intimidation, let alone using state power to do so. All this would violate the Quranic injunction against religious compulsion. Moreover, such actions only repel people from the religion, as the Quran informs the Prophet:

It was by a mercy from God that you were gentle with them. Had you been severe and hard-hearted they would have scattered away from you. So pardon them, ask forgiveness for them, and consult them in affairs.

We see now the clear result of your severity and hard-heartedness with your own people; they have scattered away from you and some of them have revolted against religion itself.

We call on you to follow the Quran and the Prophetic example: pardon your people, ask forgiveness for them (and for you), and consult them in their affairs; do not impose upon them rules and regulations without mutual consultation and agreement.

Religious policing results in hatred and animosity of the people towards the government and to the religion, and it breeds hypocrisy and false belief. Religious policing has little to do with true Islamic piety and is rather a calculated means by which authoritarian governments extend their power, control, and surveillance over their own people, especially women. The enforcement of hijab and other measures are a means of dominating women and being dictators over them, even as the government is a dictator over all the people.

This Islamic Declaration Against Religious Police was prompted by the events in Iran but its message is applicable to all Muslim-majority countries. We are not, therefore, singling out Iran, and also call for the abolition of religious or morality police in Afghanistan, Malaysia, Nigeria, Saudi Arabia, and Sudan. This declaration is also applicable to countries that make use of their regular police force in order to do such moral or religious policing, as is the case in countries such as Egypt and Pakistan.

We remind the leaders of all of these countries:

O you who believe! Be steadfast for God, bearing witness to justice, and let not hatred for a people lead you to be unjust. Be just. That is closer to righteousness. And be mindful of God. Surely God is aware of whatsoever you do.