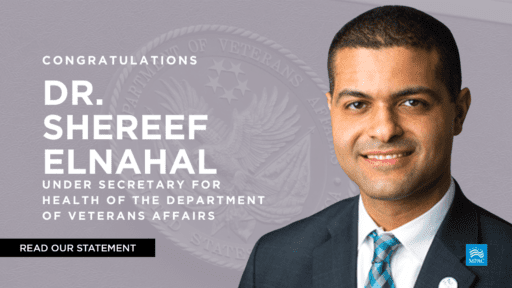 On Thursday, the Senate confirmed Dr. Shereef Elnahal as Under Secretary for Health at the Veterans Health Administration. He is now one of the highest ranking members of the Biden Administration from the American Muslim community and will oversee hundreds of hospitals and clinics that comprise the largest health care system in the nation.

Dr. Elnahal has a longstanding history of working to advance and deliver healthcare to vulnerable populations throughout his professional career. In 2015, he was a White House Fellow for the Department of Veterans Affairs, and later served as Assistant Deputy Under Secretary until 2018.

Following that, he became New Jersey’s health commissoner, making history as the youngest and first American Muslim to hold the job. His success in that role resulted in him becoming CEO and President of University Hospital, New Jersey’s only public acute-care hospital.

This confirmation reflects the longstanding history of American Muslims serving their country. American Muslims have been leaders on scientific research, saving the lives of countless Americans and were front lines at the height of the pandemic, and now through this confirmation, that work will continue to expand It is crucial that we continue working together with elected officials and candidates to propel forward our nation’s commitment to diversity and inclusion.